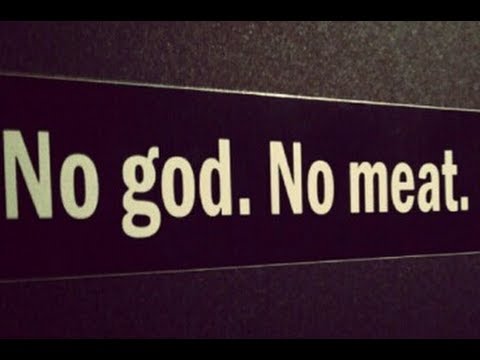 Veganism is not about eating healthier

There’s been a remarkable rise in veganism and animal rights activism in recent memory.  It made me wonder if people are just becoming more health conscious and simply avoiding red meat (but that would be vegetarianism). Very few vegans these days seem to point to the health aspects of veganism the the primary motivation for their desire to forego the taste of animal meat.   It’s all about their belief that animals are “just like humans” and they say things like, “I don’t eat food with a face”.   I understand vegetarianism.  I was a sort of vegetarian for about 4 years.  I was of the ovo-lacto-pescatarian kind of “vegetarian”, if you can call it that.  I was okay with eggs (ovo), milk (lacto) and fish (pesca).  But today’s vegans attack vegetarians for their heresy, almost more viciously than they attack omnivores.

I’ve watched an acquaintance whom I’ve known since about 2005 go from meat-guzzling gigantic bodybuilder to thin-faced vegan animal rights activist.  During the same period, I’ve watched him casually explore differential theology and craft his own nebulous view of “spirituality” in which now, apparently, animals have souls just like people do, feel exactly the same feelings that people do, and for that reason, we can’t eat them.  He seems focused on cruelty as a chief argument for veganism, but also attempts to make arguments like “there is no difference between a cow and a human woman” or “animals have feelings just like we do”.

No.  No.  No.  Animals do not have feelings just like we do.  They have sensory perception.  They have memory.  Some animals even seem to have some level of self awareness.  But they simply don’t have human emotions.  Animal Rights activists vain ploys to get you to think that animals have human emotions are all centered around “anthropomorphization” or the act of humanizing something that is non-human. Think “Little Shop of Horrors” where Seymour Krelborn’s plant comes to life, gets hungry for human blood, falls in love, kills for self-preservation, and passionately sings the blues.  That was a plant.  Not even a real plant.  And some plants (not just the fictional “Audrey II”) are carnivores!  Anthropomorphization tells you to imbue humanness onto a non-human thing.

Meat is NOT murder

Animal cruelty is just wrong.  No conscientious hunter wants to wound or maim an animal.  He wants a clean kill with as little pain and suffering for the animal as possible.  No rancher wants damaged animals and less return for their investment.  Ranching is hard work, so it’s uneconomical and self-defeating to have maltreated product delivered at auction.  Tremendous work has been done in humane livestock handling and slaughter.  I had the pleasure of watching an HBO movie about the life of famed animal husbandry pioneer Temple Grandin, who pushed the beef industry far beyond what the Humane Slaughter Act of 1958 required.   I’m of the personal opinion that dog fighting and bullfighting are cruel and stupid, but it’s not right to call a bullfighter a “murderer” with that same import as Charles Manson.  Killing and murder are not the same, but the language is being stolen by the activists.

Are animals a “person”?

Let’s worry about nouns.  We’re living in a world now, where using the wrong pronoun and misgendering someone can get you jail time.  And now the social engineers (not just the vegan ones), are trying to steal nouns, too.  You were probably taught in grade school that a noun is a Person, Place or a Thing.  Take a breath: that’s still there.  But the definition of “person” is being challenged.  The Supreme Court in the Citizens United vs. FEC ruling said that corporations are people and have free speech rights.  Transhumanists are trying to tell us that anything that can pass the Turing Test should be granted legal personhood.  Animal Rights activists from PETA are still pursuing a lawsuit (and the court is allowing it!) that would grant intellectual property rights (copyright) to a monkey who took a selfie with a photographer’s camera.  Don’t let the absurdity of this idea cause you to doubt it.

Mankind is the only creature into whom God himself “breathed” life.  When God sent his son to earth, he didn’t send a blue whale messiah.  He sent Jesus… fully God, fully man.  The enemies in the spiritual realm want one thing, and always have… for you to be separated from God.  The serpent in the garden of Eden knew how to market disobedience with “one easy trick” that would reveal the knowledge of good and evil.  The fallen angels mated with the daughters of men to corrupt the bloodlines and DNA of God’s people, but God preserved it miraculously from Noah to Abraham to Joseph to Mary so that Jesus – the second Adam – could reconcile humanity to God and reverse the curse.

Today,  the enemy of old is pulling out all the stops to try to convince humanity of their inhumanity.  There’s no such thing as a Christian Vegan morality.   Jesus ate fish and lamb.  If God didn’t intend for humans to eat meat, would God in human form eat meat? No! That would make God a hypocrite and a liar. which is exactly what the enemy of God wants you to believe.  To become a vegan animal rights activist, you have to shake your fist at God, who gave man dominion over animals, who welcomed burnt offerings, and even consumes the sacrifice from Elijah with fire from heaven.

This is not to say that if you’re a Christian, that you are required to sacrifice animals.  And you don’t have to follow Mosaic purity laws.  Yes… have that bacon-wrapped shrimp with your filet mignon (Acts 10:15). What God has called clean, call thou not unclean.