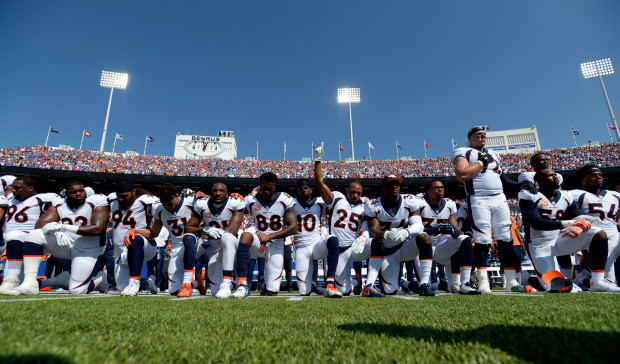 An Open Letter to the Denver Broncos

I grew up during the Orange Crush years and my first game was at the old Mile High Stadium in 1982. It happened to be Craig Morton’s retirement ceremony (we lost to the Chiefs). Since I can remember… I have always been a Broncos fan, but I simply don’t know them anymore. I’m not a fanatical jingoist who thinks that everyone should worship the flag, but I grew up in a time where we stood with RESPECT for the flag, for the National Anthem, and for our national symbols, even if we disagreed with the government, the wars, the high taxes, the laws… so be it. I happen to think that America, despite it’s problems, is still worthy of respect.

Hey Denver Broncos: Stop making it about YOU. There are things more important than you. And one of those things is our National Dignity. What has happened in our country as a result of cops killing 1,000 people a year is intolerable and must stop. But it is infuriating that some intellectually-challenged individuals have wrongly connected the warrior cop problem to our National Anthem and our Flag. That makes as much sense as knocking over your aquarium because the dog took a dump on the carpet. The reaction isn’t conceptually in the same universe as the problem.

America is NOT its government. America is NOT its police. America is not “white people”. America is ALL OF US, and when you insult the Flag and the Anthem, you’re attacking ALL OF US… not just the cops or the nebulous “whiteness” or “toxic masculinity” or “privileged 1%” that you think oppresses you. Yes… there is a problem with out-of-control cops.

But there’s also a problem with kids being shown, by role models like you, that it’s okay to disrespect authority, and that their selfish whims should be catered to and celebrated. We now have kids in grade school who are refusing to stand for the pledge of allegiance in class and showing open rebellion to their teachers… all because of what they see their football superheroes doing. And these disrespectful little brats will be the ones who ignore police commands and fight legitimate authority, thinking somehow it’s the system’s fault, not their own, when they get taken to the ground by a cop who’s had one too many encounters with self-important, disrespectful jerks like him.

I’m a just a regular guy who grew up in Aurora with my single mom… both of us loving the Broncos. But I’m also a disabled veteran who was willing to give whatever it takes for this country that you’re denigrating and disrespecting. I’ll miss being a Broncos fan. It’s a shame it had to end like this.