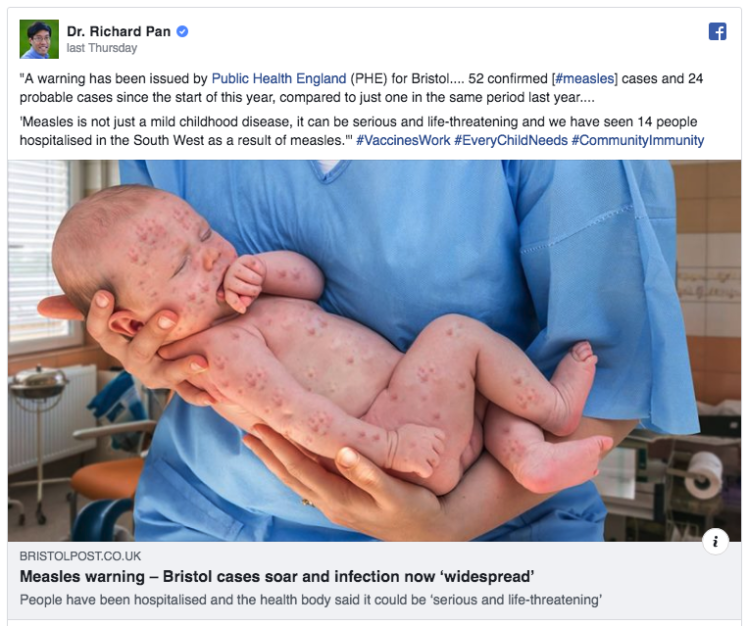 In an absolutely iconic and ironic picture of hypocrisy from the government-technocracy complex, I have been suspended from Facebook for 30 days for calling out Dr. Richard Pan and his sycophantic followers after Dr. Pan posted a story about a measles outbreak that featured a badly-photoshopped image of a newborn baby with clone-tool “measles” all over its tiny body.

Dr. Pan is the author of Senate Bill 1424, a draconian piece of legislation that will effectively create a Democrat-controlled “Ministry of Truth” where the leftist California government will decide what news is fit to be seen by the public.  Katy Grimes at Flash Report blog noted that Dr. Pan is not alone in his legislative quest to drive out “alternative facts”.

It was ironic, yet unsurprising that Dr. Pan would use “false information” in the form of a doctored (pun intended) photo of a healthy infant.  The fake photo came from a series of stock photos available at shutterstock.com showing keywords for various nefarious diseases all presented in exactly the same manner. 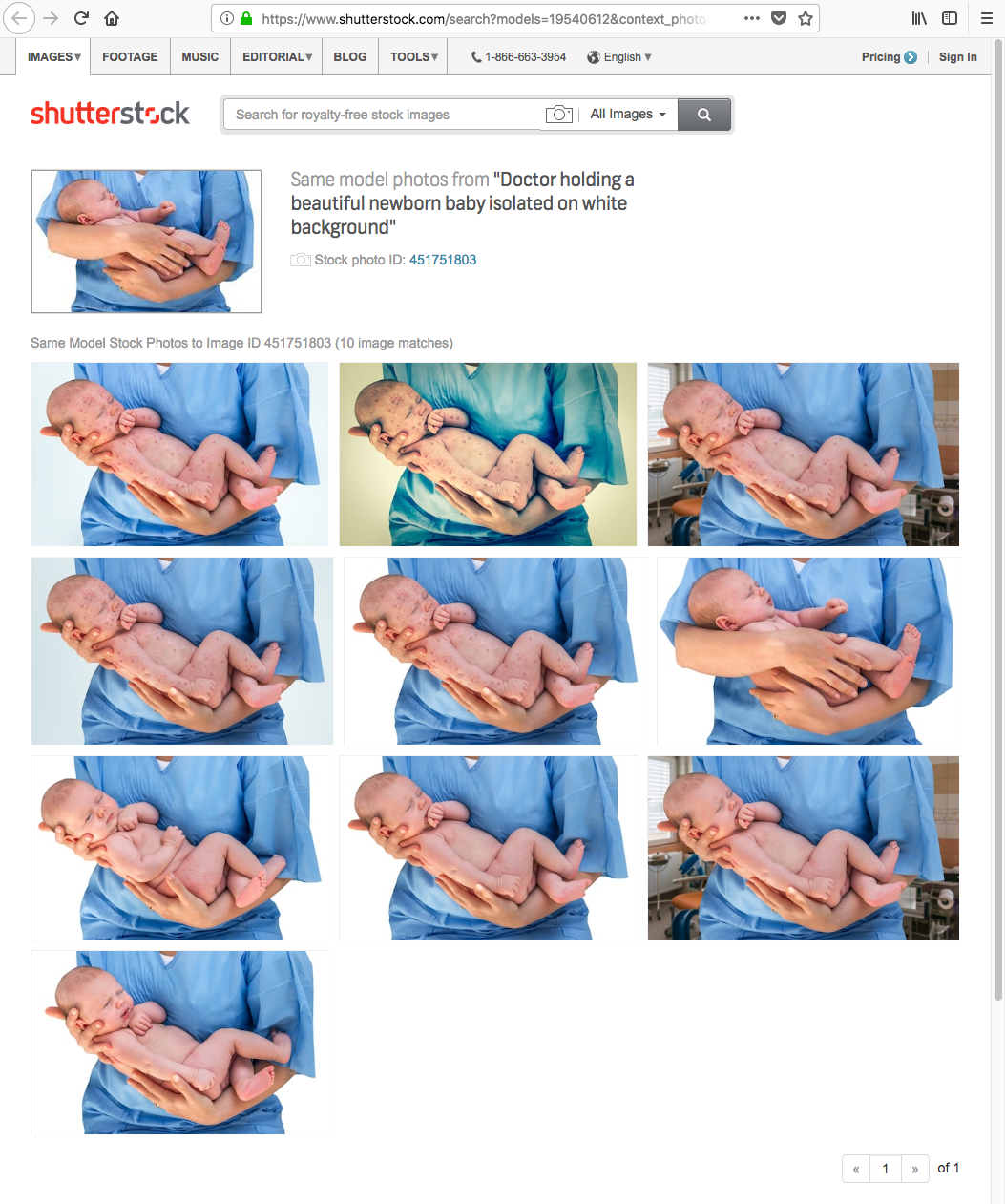 The irony, is that the fake photo looks nothing like real measles.  You would think that this wouldn’t slip past the discerning diagnostic eye of a world-class pediatrician like Dr. Richard Pan.

After making a legitimate criticism of the hypocrisy exhibited by Dr. Pan, I came under immediate attack from his merry band of froth-mouthed sycophants who denied that the photo was fake, and that even if it were, Dr. Pan didn’t write the article… he just conveniently re-published proven fake photos because “the underlying story is still true”.   ABC News seems to agree with this premise: that it’s okay to hype fake news if it brings attention to a good cause.

Serious journalism is undermined by the use of altered images in news content.  Reuters has a fairly reasonable standard for photojournalism that precludes the “addition” to any journalistic image.  The Bristol Post seems to have no such standards of journalism, nor does Dr. Pan, who re-published their fake photo.

During the volley of comments [now deleted from Dr. Pan’s page] surrounding this fake news story, a certain Bekki Kift Minier defended the use of fake photos.  At one point in the dialogue, I said,

“Bekki Kift Minier – This is why no one has any respect for Dr. Richard Pan or his supporters. You KEEP LYING even when you know it’s a lie. You make excuses. You can’t own it.”

This statement somehow ran afoul of Facebook’s “Community Standards”.  I was booted out of Facebook and received the following notice: 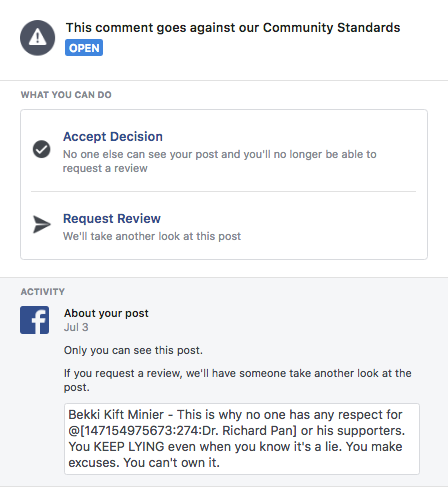 Of course, I have requested a review.  I immediately replied with the following:

Dear mods. I’m not sure how this can be perceived as violating community standards. I am addressing the actions of a California State Senator who authored legislation to make posting “false facts” a crime, while he is posting proven fake photos. His supporters are reporting my posts maliciously and for political purposes to silence legitimate criticism. I used no foul language nor did I engage in any comments that violate community standards.

After 2 days of no response, I sent another “appeal”:

“Hello Facebook Moderators.  After an exhaustive review of the Community Standards, I cannot see how my comment was in violation.  It was, in fact, calling out the political hypocrisy of a California State Senator (where I am a citizen subject to his laws) who has authored legislation to make it a crime to publish “false facts” while in the post containing the wrongly-reported comment, he (and/or his Legislative Staff) published a fake photo and proceeded to lie about the nature of it.

My comment, while critical of State Senator Pan and his supporters, is not obscene, threatening or profane.  It did not appear, in any clear and discernible way, to violate Community Standards. Additionally, I believe that it constitutes Constitutionally protected speech under the First Amendment, as it is directed as a redress of grievances toward a public official under whose legislative authority I am subject.

The same day as this suspension was enacted, I listed two items for sale in the Facebook Marketplace and I am unable to respond to (presently 4) potential buyers.  The suspension of my account may constitute negligent interference in prospective economic advantage.

I am asking Facebook to reinstate my account without delay, in order to mitigate the infringement on my protected speech,  and to remedy the loss of my ability to conclude sales already offered.”

When you run afoul of the “Community Standards,” you are no longer able to buy or sell.  You cannot respond to Facebook Messenger messages. You cannot manage or modify Ad campaigns or modify page admins for a page you manage.  In essence, you are relegated to a digital gulag that affects real-world interactions.

Dr. Pan’s fake news post remains, scrubbed of any critical comments.  Perhaps if SB1424 and its subsequent recommended legislation is passed, his own posts will be the ones limited.  But that’s likely not the case. Truth is not the goal. The goal is undeterred propaganda from the government-media technocracy.

Thoughts on the Morning after Election 2020