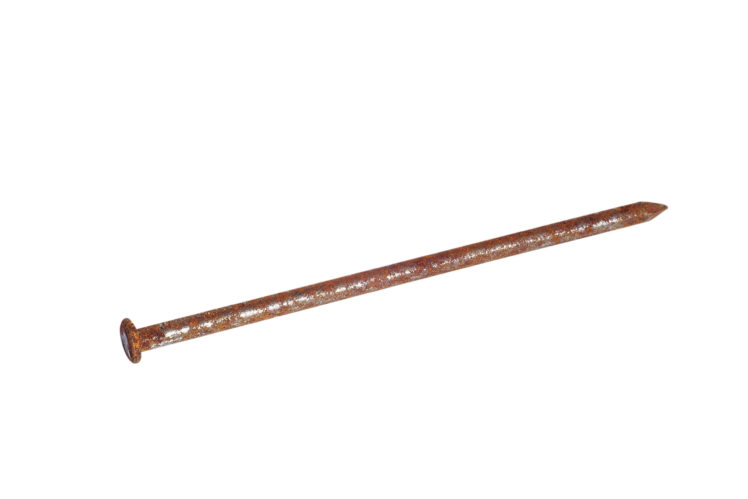 You’ve probably heard over and over again, that if you step on a rusty nail, that you’re going to get Tetanus. Rusty Nails=Tetanus. That’s what I was told my whole life. Almost every doctor is taught this unsubstantiated truism in medical school.

Last year, I suffered from what turned out to be a case of painless migraine that caused sudden blindness. I went to Kaiser Permanente immediately because I was worried that I might be having a stroke. When I got to the triage desk at Urgent Care, the nurse was completely unbothered by a desire to discover why I was blind. Her first priority was to remind her blind patient that he needed a TDaP. Why? Did I step on a nail? Does Tetanus cause blindness? I urged the nurse to set aside the vaccine bureaucracy for just a little while, so that I could be evaluated for what was making me blind. I was more concerned about dying from a stroke at the moment. Two other doctors finally figured out the migraine cause and sent me home, where the blindness resolved the same day. Do you need a Tetanus Vaccine?

I was kind of disturbed by the triage nurse’s drug-pushing before a diagnosis was even attempted and it made me wonder just how serious and prevalent this Tetanus problem is. Maybe she thought, “blind people can’t see rusty nails, so we need to vaccinate them against tetanus!”

Just how deadly is tetanus anyway? I went on a search of vaccine safety and efficacy for TDaP and my sources (revealed by Google) were all official government sites and databases. None of them were health-conspiracy blogs or vitamin websites.

That report also showed that Tetanus was most prevalent among Hispanic men aged 35-60 (59.2% were male with a mean age of 49). So unless you’re a middle-aged, hispanic, diabetic sharing a dirty heroine needle with a junky, your risk of death from Tetanus is infinitesimal. And within all those deaths; for the 61 souls who sought medical treatment for an injury susceptible to tetanus, over 96% were not given the proper protocol of wound care by medical staff (Tetanus Immune Globulin prophylaxis) [4]. They died because of medical incompetence or neglect.

In the SAME time period as the CDC Tetanus Surveillance, VAERS (the HHS Vaccine Adverse Events Reporting System) shows that 54,556 adverse events were reported following a Tetanus related vaccination [2]. It also shows that 795 people DIED in correlation to receiving Tetanus during that same period [3], meaning that you are over 400% more likely to die in association with a tetanus vaccine than you are of tetanus, and if you get tetanus and seek treatment but succumb to the toxoid), there’s a 96% historical probability that the doctors will have failed to treat your wound properly.

You’ll notice that the sources I’ve linked to are from official government data, not from a playboy bunny or some supplement peddling website. Thanks Google for pointing me to these authoritative sources.